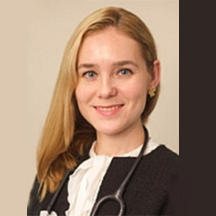 Dr. Elena Frid is a board-certified neurologist, neurophysiologist, and ILADS member who specializes in the care of children and adults with autoimmune disorders and infectious processes, especially Lyme disease. Inspired by her own children, she has also developed a protective clothing line to keep them safe while playing outdoors. Recently, Lyme Connection newsletter editor Janet Jemmott spoke with her in the New York City office where she is the medical director.
How did you become interested in infections induced autoimmune syndromes?
In my residency and fellowship training program, we were introduced to a number of autoimmune disorders including limbic encephalitis and various types of neuropathies, and this piqued my interest. Then, shortly after I established my private practice, I was exposed to patients who did not fit into a purely psychiatric or a specific neurologic diagnosis. I started working closely with these patients, often learning from them about various workups and treatments they had undergone. Many of them mentioned Lyme disease and brought in articles and talked about organizations such as International Lyme and Associated Diseases Society (ILADS). After I attended a few conferences it became clear to me that there is an association between infections and neuro-developmental, neuropsychiatric, and in some instances, neurodegenerative conditions. It was clear that in many of the patients I was seeing, infections, inflammation, and autoimmune processes were the trigger to their neurologic syndrome and clinical presentation.

If a patient comes in to see you and you suspect they have an infection or multiple infections that have induced some kind of autoimmune syndrome, Lupus or MS or Chronic Fatigue Syndrome – how do you determine, one, that they have an ongoing infection and if they have an autoimmune syndrome?
I rely on detailed history taking, physical exam findings, extensive blood testing, which may include some specialty labs, imaging studies such as MRIs and brain SPECT, and other diagnostic tools including Electroencephalogram (EEG), Nerve conduction studies/Electromyography (NCV/EMG), Lumbar puncture (LP), neurocognitive assessment and others depending on clinical presentation.